With the first half of 2017 in the books, the overarching theme thus far has undoubtedly been the lack of volatility in the U.S. equity markets.  Stocks have managed to side step numerous macroeconomic misses, monetary tightening with a keen focus on unwinding the Fed’s balance sheet and plunging oil prices.  So far, nothing has been able to derail this Teflon market.

While rising 0.5% in June, the S&P 500 has now increased 8.2% year-to-date and risen 15 of the past 16 months on a total return basis.  This is the best first half performance since 2013, which went on to soar 32.4% that year.  Through the first six months, the S&P 500 has experienced a maximum drawdown of 2.8%.  To put this into context, over the past 65 years this is the second smallest drawdown in the first half of the year.  More impressive is that of the 16 years where the first half experienced less than a 5% drawdown, 13 of those years or 81% of the time the S&P 500 increased in the second half the year with an average return of 7.8%.  Given this information, it would not be a bold call to say the probability of the S&P 500 going higher in the second half of this year is in our favor.  However, knowing that the average drawdown during an entire year is roughly 9%, it’s also safe to say we will most likely experience a few more bumps along the way.

As for what is expected, second quarter earnings growth is estimated to slow down to 6.8%.  This growth number has been revised down from 9.0% since start of the second quarter.  Again, the earnings growth is to be led by the energy sector.  However, it would be prudent to see how many energy companies meet or beat expectations considering oil prices closed the quarter down 9% while falling 20% at one point.

Valuations continue to remain elevated, which shouldn’t be news to anyone who has read this column over the past couple of years.  You can’t go a day without someone calling this market a “bubble”.  Now, I don’t necessarily agree that we are in a “bubble” since the main ingredient, excessive investor sentiment, is not present.  If you want to see the price action of a “bubble”, look no further than Bitcoin over the past few months or technology stocks in 2000.

What is rather interesting is comparing stock valuations today to those at the turn of the century.  Seventeen years ago, Coca-Cola was trading at 50x earnings, while Cisco Systems was trading at 130x earnings.  Many of the technology stocks didn’t even register a P/E ratio since they didn’t actually earn any money.  The most expensive stocks in 2000 were way more expensive than stocks today, which caused the S&P 500 as a whole to also be more expensive based on P/E ratios.  However, the S&P 500 is a little more expensive today than it was during the tech bubble on a stock by stock basis – making undervalued stocks much harder to come by.  The median P/E, according to Bloomberg and Jones Trading, in the S&P 500 today is 21.3x, while it was only 17.4x in 2000.  Further highlighting the broad based expensive nature of today’s market is that the bottom quintiles of stock valuation are more expensive today than in 2000, which is deemed to be one of the greatest stock valuation “bubbles” of all-time.  In other words, there are a greater number of stocks today that are more expensive than in 2000, but the most expensive stocks today are not quite at the levels reached by the most expensive back in 2000.  The following is a chart recently published by Bloomberg. 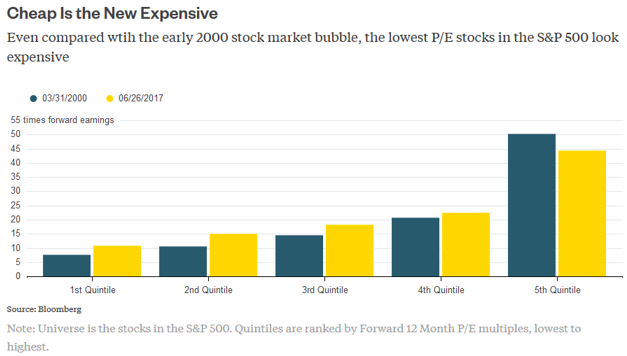 Over the past month, we got the opportunity to take a new position – Dollar General (DG)*.  On June 16th Amazon announced their plans to acquire Whole Foods.  The entire retail sector was shaken to its core.  Other than Amazon and Whole Foods, pretty much every consumer discretionary stock fell because the perception was and continues to be that Amazon will put them out of business.  In addition, much of the consumer staple space also came under pressure that same day.  The thinking here is that Amazon will be so large and control every facet of human life that they will put pricing pressure on and squeeze the margins of their suppliers.  The “Amazon Effect” is real, but we don’t believe they are taking over the world.  Thus, it’s providing us opportunities in DG*, Dollar Tree (DLTR)** and National Retail Properties (NNN)***.  We also continue to increase our position in Factset (FDS)**** that we’ve been building since April.

We also took the opportunity this month to continue the process of liquidating a few of our holdings.  In all three instances, our stops we had in place were triggered.  The stocks quickly bounced back to these levels, which allowed us to get better execution prices than if we were to sell with the “herd”.  Qualcomm (QCOM)* was fully liquidated and WW Grainger (GWW)**** was partially liquidated after failing to meet our fundamental and quantitative criteria.  Thermo Fisher Scientific (TMO)***** was partially liquidated due to the inability to consistently grow their dividend.

What year was Fed Chair Janet Yellen referring to in the following quote?

“Most advanced economies were pretty stable, macro performance was good. Inflation which has been very high in the seventies and brought down in the eighties was pretty low and stable. Central Bankers were patting themselves on the back, that they understood how to do their jobs and that they had developed frameworks that worked. I think many people thought- the business cycle we figured all of this out, it is fundamentally dead. Perhaps that was a problem also for individuals who thought –you know what, this isn’t a very risky environment perhaps that whole environment was one that encouraged undue risk taking especially with low interest rates- people searching for yield.”

Answer: The year was 2007.  However, you wouldn’t be wrong if you thought it was 2017.  Pretty much everything she said could be applied to today’s conditions.

*  DG was purchased and QCOM was sold across Tandem Large Cap Core and Equity.

**** FDS was purchased and GWW was sold across all strategies (Tandem Large Cap Core, Equity and Mid Cap Core).

***** TMO was sold across Tandem Equity and Mid Cap Core.