Observations
- Observations ~ Is this the End? ~ December 1st, 2015
by tandem

December 16th is quickly approaching. If you are unaware of the importance of this date, you will no doubt hear about it ad nauseam in the coming days. The media will soon have you believe that the next Federal Reserve meeting will be the most “important” meeting in the history of Fed meetings. Newsflash… it will not be the most “important” or anywhere close to the most “important”. In fact, it’ll be hyped up just as much as Y2K with a very similar outcome – the sun will rise the following day, computers will still turn on, financial markets around the world will continue to operate and most importantly our lives will ultimately not be affected.

The last time the Fed raised interest rates was over nine years ago in June 2006. To put this into perspective, it would be another year before the iPhone would be introduced, Jordan Spieth was a month away from his 13th birthday and MySpace was the largest social networking site in the world. To say a lot has happened since the Fed last raised rates would be an understatement. For nearly a decade, the Fed has been trying desperately to stimulate the economy through various actions.

Many would argue their monetary policies helped save us from falling into the abyss of a depression and put us on the road to recovery. Others would say their policies are the reason for one of the slowest economic recoveries in history. Most people fall into one of these two categories. They either applaud the Fed for every action they take or despise them. The fact is you don’t need to pick one side or the other. I believe the Fed did their job when the economy and financial system were in free fall. They aided in putting a halt to the panic gripping the world and were able to give a jump start to the economy. Unfortunately, I also strongly believe they overstayed their welcome.

Now, don’t get me wrong, not all has been lost with the never ending Fed intervention. Stock investors have benefited greatly from owning stocks over the past six years. A couple benefits of ZIRP include an increased amount of stock buybacks from companies and a significant amount of M&A (mergers and acquisitions) activity. First, ultra low interest rates have incentivized companies to lever up their balance sheet to purchase their own shares with the intention of financially engineering per share profit growth. Not all companies managed to benefit from shrinking their shares outstanding (i.e. IBM), but many did. The companies experiencing the greatest benefit measured by stock price appreciation are the ones that could grow their underlying business while buying back their stock. One example of such a company that Tandem’s clients* owned is O’Reilly Automotive (ORLY). We purchased the stock for the first time a little over five years ago. During this time period, ORLY managed to grow revenues over 45% and operating income over 100%. These superb results allowed ORLY the financial flexibility to buy back 25% of their shares outstanding over the past five years. On the flip side, IBM managed to also buy back nearly 25% of their shares, while posting -18% revenue growth and -10% operating income growth. The price chart below clearly shows the benefit of owning a growing company (ORLY) who buys back their stock versus a declining business who decides to forego investing in themselves to financially engineer per share profit growth. 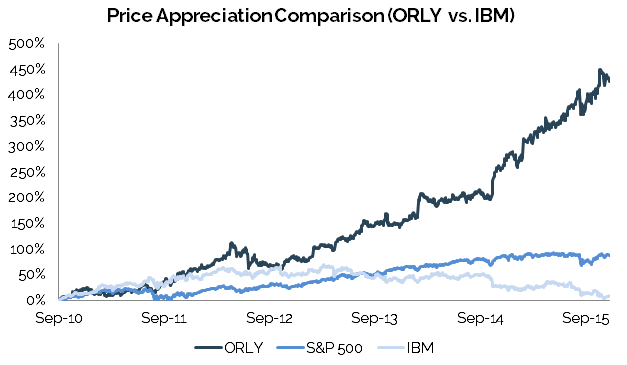 The second benefit of ultra low interest rates in regards to increased M&A activity has really accelerated within the past several weeks. Tandem portfolios** have certainly benefited. On October 26th, it was announced that Duke Energy (DUK) offered to buy Piedmont Natural Gas (PNY) for $60 a share. Our clients were instantly rewarded with a 42% premium over the previous day’s closing price and a 58% premium over the average 2015 closing price in PNY shares. According to Dealogic, as of November 25th, Global M&A for 2015 stood at $4.52 Trillion, which is just shy of the record set in 2007 of $4.61 Trillion. These are massive numbers and we’ll most certainly not complain about being a beneficiary to the M&A boom!

Clearly, the benefits have mostly gone to boosting the prices of financial assets, but have ultimately failed to really kick the economy into the next gear. The recovery and economic growth is a hotly debated subject in light of the potential interest rate hike by the Fed. The majority of financial pundits say the U.S. economy has recovered to the point where the Fed can began “normalizing” interest rates. To this, I have two things to say. First, yes, the economy has recovered since the Great Recession officially ended in June 2009. Second, what the heck is normal these days? There has been nothing normal about this economic recovery and there has been nothing normal with regard to the Fed’s monetary actions since 2008. In fact, the Fed’s policies have been unprecedented! At no point in the history of the U.S. have we experienced a 0% Fed Funds Rate, let alone seven years of ZIRP. In addition, the Fed’s balance sheet has ballooned to over $4.5 Trillion from a then record high of roughly $850 Billion in June 2006. For those who say we can now get back to “normal” monetary policy, you might want to think again. We are in uncharted waters, so everything the Fed does going forward is all an experiment. Let’s be honest, none of us know what is going to happen. If the Fed decides to hike rates this month, it’ll be the first time they do so in the face of a revenue, earnings and manufacturing recession. Good luck predicting that outcome! But, what I can predict is regardless of what the financial media may lead you to believe over the next few weeks, ultimately the sun will rise and we’ll go about our day as we’ve done a million times before.

* ORLY is owned in the Tandem Equity and Tandem Mid Cap Core strategy.