Observations ~ Interest Rates and the Keys to Growth ~ January 4th, 2017

Observations ~ Interest Rates and the Keys to Growth ~ January 4th, 2017

Thud! Bang!  That is how 2016 started and ended.  The worst start to a year in stock market history was followed by an incredible turnaround.  The S&P 500 fell by 11% into early February, only to rise 25% off its low and end the year with a 9.5% price return.  The path of small cap stocks from the beginning to the end of the year was even more breathtaking.  The Russell 2000 initially declined 17%, ricocheted 47% off it’s 2016 low and closed the year with a 19.5% price return.  Absolutely nothing could slow down the U.S. equity market.

So, what is in store for 2017? Not that long ago, it was widely believed that stocks would fare poorly if Donald Trump were elected President.  Well, that hasn’t proven to be true, considering the S&P 500 is up over 5% since the election.  Equity prices are riding a wave of hope on future expansionary fiscal policy.  If the promises of corporate tax reform and deregulation become a reality, then the positive effects on corporate fundamentals will be extremely powerful.  Earnings estimates will most likely be revised higher and the recent rally in stocks will be justified.  However, there is one thing I believe is being overlooked during this recent bout of optimism that you may want to keep an eye on in 2017 – interest rates.

A few weeks ago, the Federal Reserve raised interest rates for the second time since the Great Recession. Many viewed the rate increase as a positive in that we are one step closer to “normalization” and one step closer to sustainable growth.  Maintaining interest rates at the zero bound for as long as the Fed did was certainly anything but “normal”.  But, you’d be kidding yourself if you thought we were headed back to “normal” any time soon.  If “normal” interest rates are defined as pre-financial crisis levels, then trust me when I say you don’t want to get there in a hurry.

Debt can be very useful in planting the seeds for future growth. However, like anything it is only good in moderation.  To say corporate debt growth over the past several years has been moderate would be an understatement.  As seen below, extremely low interest rates over the course of several years have allowed companies to go on a debt binge. 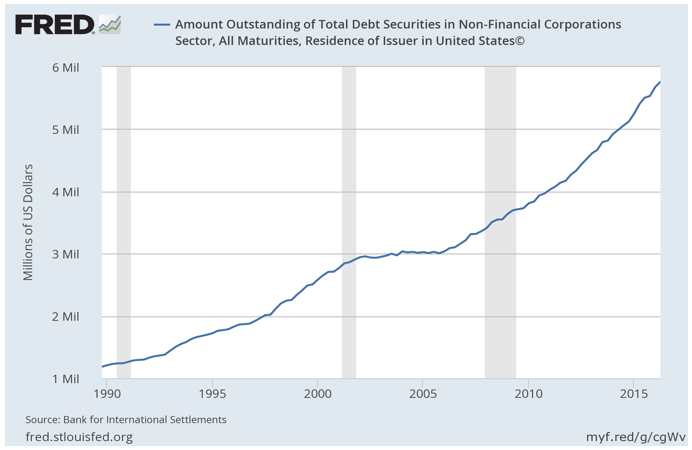 As long as interest rates remain low for an extended period of time, corporate interest expense will remain in check and not eat too much into margins. And, if credit markets remain loose enough to refinance debt, leverage can remain at elevated levels.  However, at a certain point a company just can’t stomach any more debt.  Some companies are surely at that point now and others have a little more room to lever up.  Either way, the amount of debt corporations can handle is closer to the end than the beginning, especially if the 30-year bull run in bonds has ended, as some speculate.  We already know that corporate debt is at an all-time high.  But, what is more troubling is the amount of debt as a percentage of operating income (EBITDA).  This ratio has never been higher. 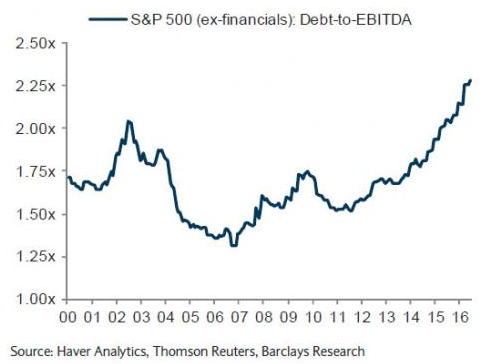 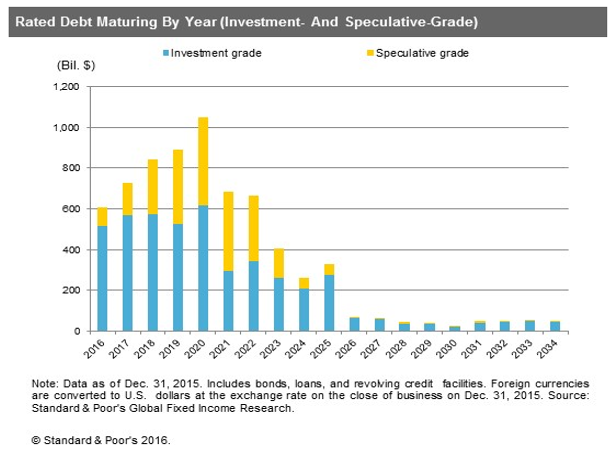 Companies do not have the cash on hand and do not currently generate enough cash to pay back the debt, which is precisely why you don’t want to see interest rates rapidly increase from here. The best-case scenario would be for fiscal policy to be enacted quickly and have a near immediate effect on corporate profitability, while rates remain low and stable.  If interest rates increase too fast before fiscal policy can take hold, any benefits of the expansionary policy will likely be offset by an increase in interest costs, which will detract from margins and overall profitability.

Many people, including myself, want to eventually see higher interest rates. Higher rates attract capital for investment and reward savers.  These are all good things that we have not seen for some time.  However, you need to be careful for what you wish.  A sudden increase in rates would not be good for the economy or the health of corporate balance sheets right now.  We do not live in a “normal” world nor are we going back to that world any time soon.  We must live with what we’ve got.  And what we’ve got is a corporate culture drunk on debt and the next morning is quickly approaching.  Companies can right this ship, but only if rates remain low and expansionary fiscal policy come to fruition in 2017.