January was certainly an exciting month. And as I write this column, the first couple days of February have been even more so. If it weren’t for the last few days in January, the S&P 500 was on track to annualize a return well over 100%! As I’ve written many times over the past few months, the market’s advance and lack of volatility has been unprecedented on many levels.

Equity markets domestically and around the world have literally gone in one direction for some time now, so this past week’s decline of 3.85% should not come as a shock to anyone. It is not healthy for the market to go up every day. This type of price action invites speculation instead of investment, which is exactly what we saw during the first 26 days of January. In fact, much of January was dominated by the FOMO (Fear of Missing Out) trade.

• Discount brokerage firms were reporting a record amount of new accounts being opened.
• The week ended January 24th saw equity funds post the largest weekly inflow on record.
• Bank of America’s Bull-Bear proprietary indicator recently hit 8.0, which triggered a sell signal. There have been 11 sell signals recorded since 2002. The indicator has been flawless in predicting market weakness over the following three months with an average drawdown of 12%.
• The S&P 500’s monthly RSI (relative strength indicator) was over 90%. The last two times this happened were in 1986 and 1995. Subsequently, the S&P 500 declined 6% and 9%, respectively, over the following month.

There is no denying that the market was entering the euphoric stage. Each passing week the S&P 500’s line of ascent was getting increasingly steeper. These trends don’t last forever. At the very least, you don’t want them to last forever. Bad things happen when markets go parabolic – see 1987. This past week’s price action and largest decline in two years should not be shunned, but rather welcomed and embraced. A nearly 4% decline within a week can be scary, especially in the context of how the market has traded over the past two years. But, anyone with an investment timeframe of more than a single day should want this recent “correction” to deepen. It is only then that some of the best investment opportunities present themselves.

The good news is that since 1950 when the S&P 500 posted a positive return in January greater than 5%, the full year return was also positive. This has happened 12 different times over the past 67 years. In 11 of those instances, the February through December return was even higher than January’s return. The only exception was in 1987. Most people only recall the crash in October 1987, but few remember the full year return was still positive.

After a fairly quiet November and December on the transaction front, we hit the ground running to start the New Year. On January 3rd, news broke that Dominion Resources (D) had decided to buy Scana Corporation (SCG) in an all-stock deal for $55 per share. The terms of the deal were that SCG shareholders would receive two-thirds of a share of D for every share of SCG they owned. SCG immediately jumped roughly 25% on the news, while D fell 4%.

Regular readers of this column will recall the lengths we’ve gone to explain the SCG saga and our reasons behind remaining shareholders of SCG. And, then came the deal… After analyzing the first day of trading post the merger news, we quickly realized it was not in our clients’ best interest to remain shareholders. One day into trading and D’s closing print valued the SCG take-out price at $51.48. Even at that price, SCG was trading at nearly an 8% discount, which showed skepticism that the deal would even close. As a firm, we decided the best action for our clients was to liquidate at SCG’s current price and avoid all the headline risk to come. And, so we did. We liquidated SCG at roughly $48.00 on the morning of January 4th.

The decision to liquidate SCG was also influenced by being long-time shareholders of D. If the deal closes, our clients will still own SCG’s business through the ownership of D shares, which is likely to be accretive to D’s earnings within the first year. If the acquisition falls through, D shares are likely to rebound in price to where they were trading before the deal was announced. And, our clients will not have to endure the pain of SCG falling back down in price due to a failed deal. In our view, it was a no brainer to liquidate SCG, while looking for a better opportunity to add to our D position.

In addition to liquidating SCG, we took the first steps to liquidate our position in Cerner (CERN). CERN has been searching for a new CEO for several months now. Considering the majority of their executive team has been with the company for decades, we did not think CERN would decide to hire a CEO from outside their walls. Well, we were wrong. CERN hired a CEO from outside the company, which is a fundamental violation of our most basic investment criteria. Therefore, CERN is now in process of being liquidated.

Other than portfolio liquidations, we did incrementally add to our position in Cognizant Technology Solutions (CTSH). We highlighted CTSH in last month’s column, as we took an initial position within our Large Cap Core strategy. CTSH was added to on a break above a previous all-time high set a few months back around $76.50. Even with CTSH trading close to all-time highs, it remains one of the more undervalued stocks in our strategies.

The market’s advance over the first month of the year has been justified in many ways. The speed and ascent are debatable, but there is no questioning the fundamental growth underlying the market. Due to the passage of the tax reform bill, earnings estimates for the S&P 500 have been going higher. According to Standard & Poor’s, 2018 operating earnings estimates have increased from $145.80 on 12/31/2017 to $153.19 today. This represents an estimated annual growth rate of 23%. The 2019 estimates have also increased from $160.03 at the start of year to $169.43.

Companies are growing, but nearly the entire increase in earnings expectations has come from lower future taxes. Sales expectations for 2018 have increased negligibly to reflect 6% growth in 2018, but actual sales will have to grow faster than 6% if some of these earnings estimates are to be met. Profit margins are already at all-time highs, so further profit margin expansion (outside of the one-time tax adjustment) in the face of higher wages and increasing borrowing costs seem unlikely.

On the valuation front, the S&P 500 continues to trade at a premium. According to the Cleveland Fed, the average forward P/E ratio of the S&P 500 since 1900 is 16.5x. Currently, the S&P 500 is trading around 18.5x. The forward P/E ratio is a bit extended but has nothing on the P/S ratio. The P/S ratio just passed the historical record of 2.25x set in March 2000. In January of this year, the P/S ratio hit a record 2.35x. Clearly, the new corporate tax structure is bringing down earnings valuation a little bit but has not had the same effect on sales. To see real sustainable growth, we will need to see tax reform bleed into the demand side of the equation. The trillion-dollar question is whether or not lower corporate taxes can increase top line growth, which will truly justify current valuation levels. Only time will tell. 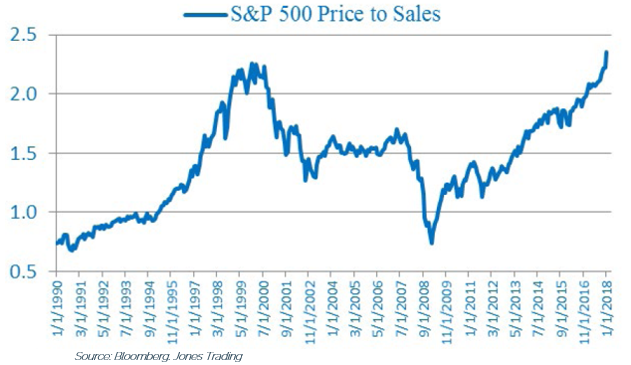 Observations from the Bleachers

I believe the two biggest trends to watch are the path of interest rates and what companies decide to do with their repatriated earnings.

In 2008, just before the height of the financial crisis, U.S. federal debt to GDP stood at 65%. Currently, this ratio is at 106%. Factoring in the passage of tax reform, the budget deficit is expected to rise $750 billion this year and $1 trillion a year for the next three years. Since the passage of tax reform, the U.S. dollar index has declined 5% and the U.S. 10-year treasury bond has increased roughly 40 basis points. Many will argue these moves are more reflective of the deteriorating balance sheet of the United States rather than a resurgence in growth. Again, only time will tell, but the recent moves in the U.S. dollar and interest rates are worth noting. 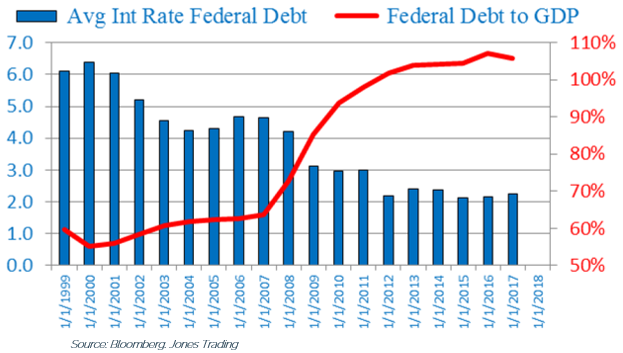 The second trend to watch is what companies decide to do with their offshore cash. One of the big aspects to tax reform was the ability for companies to bring back their cash from overseas and repatriate their international earnings at a reduced tax rate. The goal of allowing companies to bring home their cash was for them to reinvest in their business and their employees to drive future economic growth. For the most part this is happening, but not as much as you might think. Many employees are getting one-time bonuses, but not necessarily significant sustained wage hikes. The increased capital investment in the business is being mentioned, but more as an after-thought. The most surprising commentary, which I did not expect but think is smart, is using the cash to strengthen their balance sheet. Almost every executive has mentioned the need to pay down debt and fund their pension plan. It is not a sexy use of cash, but it is a very wise use of it. It is not the type of cash allocation that will spur economic growth. But, realizing we are in the midst of the second longest recovery on record and probably in the later innings of this business cycle, it makes a lot of sense to position yourself for any potential future weakness. This is a smart business move, but not one that was probably intended by the creators of the tax reform bill. All of this points to growth having been pulled forward rather than newly created. It will be interesting to see how everything shakes out in the end. Stay tuned!