The first Fed rate hike in almost a decade is now in the books. We would like to examine the unusual set of economic circumstances in place as the Fed makes its move.

For the first time since the Great Recession, the S&P 500 is entering its 4th consecutive quarter of decreasing rolling operating earnings growth. In the chart below, any period of at least 4 consecutive quarters of negative S&P 500 year over year operating earnings growth is shaded in red. Clearly, the companies in the S&P 500 are struggling to grow their earnings—a definite negative indicator for the U.S. economy. All previous earnings recessions dating back to 1988 occurred during U.S. economic recessions. Thus, the earnings recession that U.S. companies are facing is certainly concerning. 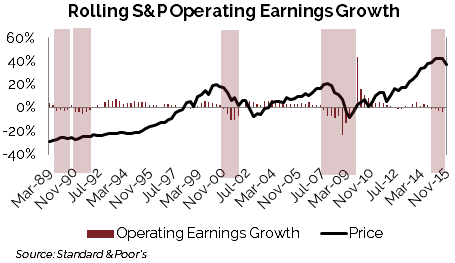 While it is clear that companies are struggling to grow, one must pin down exactly what parts of the economic wheel are failing to turn—which brings us to industrials. With negative headwinds in the form of the strong U.S. dollar and the oil free fall, industrial companies have been distinct laggards in the economy. 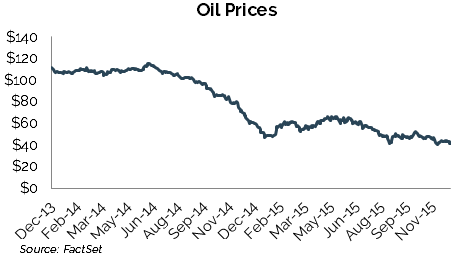 Economically, a strong dollar leads to an increase in imports and a decrease in exports—which hurts U.S. companies. Fastenal Co. CFO Daniel Florness put it very plainly, “The industrial environment is in a recession—I don’t care what anybody says, because nobody knows that market better than we do.” To further underline Florness’ point, ISM PMI – a measure of US manufacturing – has recently dipped below 50, which indicates a contraction in the manufacturing sector. ISM PMI has also been steadily decelerating since October 2014. 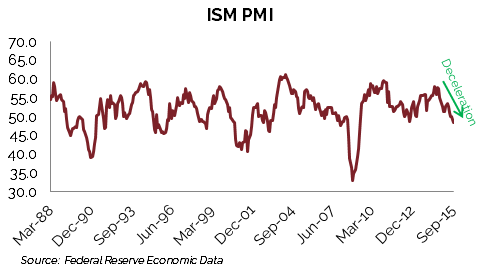 Another key indicator that not all is well in the economy is the inventory to sales ratio. Wholesalers are experiencing a buildup in inventories, as demand simultaneously wanes. This had led to the inventories to sales ratio hitting new post-recession highs in 11 of the last 12 months. 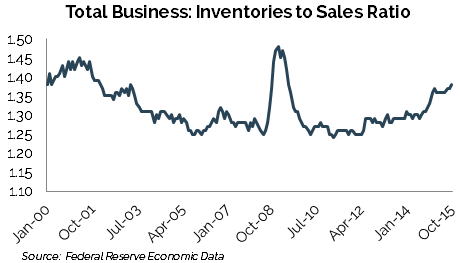 Take it straight from the horse’s mouth—in the form of Florness—if you would like, or look at the economic data. Regardless there is clearly a contraction in the industrial side of the economy.

The non-manufacturing side of the economy appears to be much healthier than its manufacturing counterpart. The ISM Non-Manufacturing: NMI is still reporting expansionary numbers. Similar to the aforementioned ISM PMI, any number above 50 in this index is expansionary and any number less than 50 signals a contraction. November’s number was healthily above 50 at 55.9, which means that the non-manufacturing part of the economy is still growing—a seemingly positive indicator for the economy. The ISM Non-Manufacturing: Business Activity Index also shows expansionary growth in business with a reported number of 58.2. However, if one looks at the number more closely, and more specifically the trends of the recent numbers, one can see that the index has been in a relative down trend since it hit a post recession peak this past July. 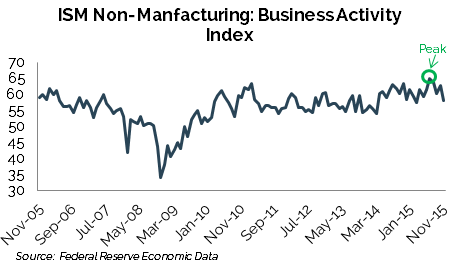 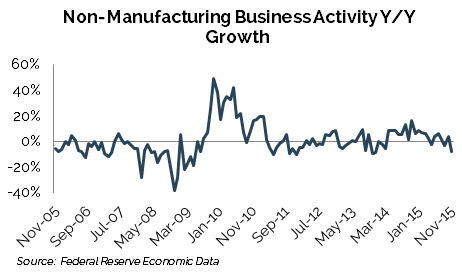 At face value, the non-manufacturing sector is still growing—growth is positive and its indexes are still signaling expansion—however, the slowing rate of growth and general trends are troubling.

Many have proclaimed that despite the industrial and earnings recession, not everything is so dark and dreary. Right they are! The jobs reports—specifically October’s and November’s numbers—have arguably given the Fed the fuel they needed to drive their rate hike. Unemployment rates have continued their steady descent to just 5%. Comparatively, the U.K. has rates around 5.8%, France is above 10%, and Canada is hovering right around 7%. The U.S. labor market appears to be alive and kicking! Yet to truly understand the United States’ current labor market conditions, one must look at where it stands historically. The initial claims for unemployment benefits are reaching historic lows, which at first sounds like great news. In reality, it appears far more likely that we are reaching our natural rate of unemployment. As one can see, as initial claims approach historic lows (so the economy is “fully employed” or at its natural rate of unemployment) it generally precedes an economic recession—which is shaded in red. This makes sense logically—we currently appear to be at peak employment, and following every peak is the subsequent downfall. Given that we are at a peak, and that employment is typically a late cycle indicator, it is likely that the U.S. labor market will begin its descent in the economic cycle—which has historically led to recessions. 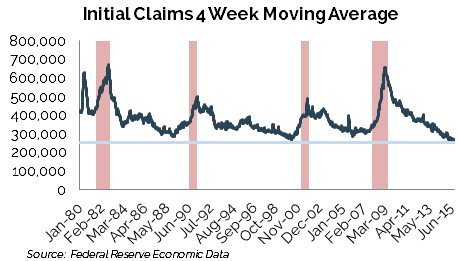 Now, one could not truly consider this to be economic commentary without touching on the two big ones—GDP and CPI. In 2004, Real GDP hit peak year over year growth of just over 4%, after which GDP growth contracted almost every quarter until it bottomed out in 2009, signaling the end of the Great Recession. Since bottoming out in June 2009, GDP year over year growth has bounced between 1% and 3%. A couple things may be taken away from these numbers. First, GDP is growing at historically low rates. As one can see in the chart below, GDP is growing at its lowest rate during an expansionary period since 1949. 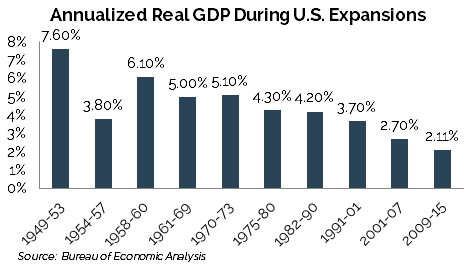 However, unlike many other times leading up to a recession, there is no overwhelming trend in the current GDP growth rate (though GDP has decelerated on a year over year basis the past two quarters). Leading up to the Great Recession was a distinct slowdown in GDP growth, and while there is a slowdown, it is certainly not as drastic as it was leading up to 2008. Inflation is currently an interesting indicator as well. While much of this commentary has hinted at historical negative undertones in the U.S. economy, inflation is actually the opposite. Typically, inflation has grown heading into a recession, at which point inflation peaks and then drops violently as the economy contracts. Post-recession inflation peaked in April 2012 at 2.3% year over year growth and then gradually declined. Now it seems inflation is beginning to creep back up toward those peaks. More specifically, November inflation was almost 2% on the dot—the Fed’s magical target rate—which gave further credence to the fed hike.

The economy has been sending mixed signals most of the year. Some indicators, such as jobs or non-manufacturing numbers, have been used to depict a still growing economy. Other indicators, such as S&P earnings and industrial data, are showing a marked contraction in the economy. However, it appears that we are currently on the backside of the economic cycle. The negative numbers are quite clear in showing that U.S. industrials are slowing, and if one looks at the supposed good numbers one can see that they have bearish undertones as well. Non-manufacturing business, while still growing, is doing so at decelerating rates. Inventories to sales are hitting new highs that have not been seen since the middle of the last recession. All in all, it seems like the economy is beginning to turn and begin its descent in the economic cycle—industrials and most of the S&P have already turned and it appears that non-manufacturing industries are beginning to turn as well. While one cannot predict with certainty where the U.S. economy is headed, it does seem certain that growth is becoming harder and harder to come by. And rates are now headed higher. This all makes for a very interesting 2016.