It’s that special time of year again. Only this time, the Season of Giving has started even earlier. If you haven’t noticed, over the past couple of years the holidays seem to sneak up sooner and sooner. Maybe it’s just having a 3 year old that makes time seem to fly by, but it’s also retailers jumping the gun. I was in a Walmart a few days after Labor Day and noticed they began removing all of the grills and lawn equipment to make room for Thanksgiving and Christmas decorations. This is crazy! Summer hadn’t even officially ended and we were now forced to think about Christmas. To top it off, Black Friday used to be a single day in November where every retailer offered up insane deals. Over the past couple of years, retailers decided one day was just not enough, so they began to open their doors on Thanksgiving. Black Friday soon became Black Thursday and Friday. To make matters worse, Walmart and Target just announced they will be starting their “Black Friday” deals on November 1st this year. Black Thursday and Friday has now quickly become Black November. We all need to just stop getting ahead of ourselves and slow down, because there is a lot we are going to miss along the way.

The month of October had a little bit for everyone. Equity and commodity markets around the globe were in quite the giving mood as they finished higher on the month. Specifically, the S&P 500 increased 8.3% to close October within 2.4% of an all-time closing high set in May of this year. As I mentioned last month, the sentiment coming into October was extremely bearish. And, as expected, the U.S. equity market rallied in the face of such low sentiment readings. What I didn’t expect was the duration of the rally. I assumed once the short covering and bearish sentiment exhausted itself, the market would turn its focus on company earnings and economic indicators. Instead, we got a lot more of the same. The promise of additional easing by the European and Chinese central banks allowed the equity rally around the world to not skip a beat.

It’s my job as a portfolio manager to assess the risk/return profile of each investment within a portfolio. One way to evaluate this is to measure the valuation of a security versus the rate of change in revenue, earnings or cash flow growth over a specified time period. Simply put, a higher valuation is justified if underlying growth in the fundamentals is accelerating. On the flip side, a lower valuation is justified if the underlying growth in a company’s fundamentals is decelerating. At the end of the day, it is extremely important to know where you are within a growth cycle and what you choose to pay for that growth. It’s not my job to chase price without regard to the valuation being paid. A trader can chase prices as they tend to follow momentum based strategies. That is not my style. I much rather prefer to slow it down and understand what it is I’m buying as opposed to blindly jumping on the train or letting FOMO (Fear of Missing Out – see the June edition of Observations) control my decision making.

Over the past month, the underlying fundamentals of the U.S. economy and many companies have continued a trend of not being nearly as giving as the returns one experienced from the price appreciation of the S&P 500. In many cases, investors are paying higher valuations for decelerating growth. The following charts are indicative of what has been going on under the surface. Not everything is as rosy as what the price action of the S&P 500 might have you believe. You will notice a common theme over the next 5 charts – a steady decline and deceleration over the past year. 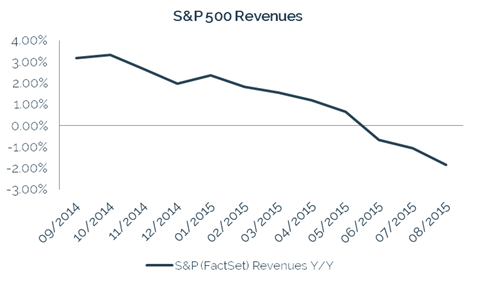 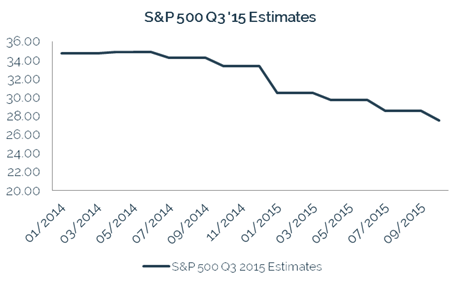 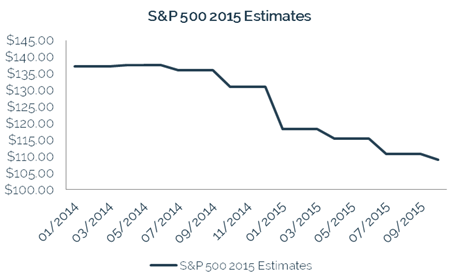 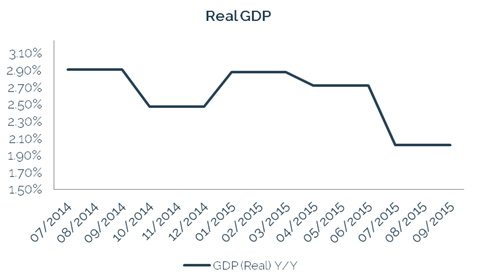 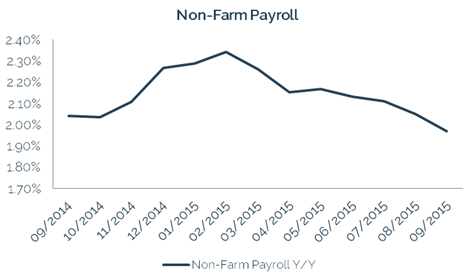 It is clear there is a quite a disconnect between the economy and the index level of the S&P 500. Revenues for the S&P 500 continue to decline and have now experienced negative growth for the past two quarters. The S&P 500 earnings estimate for the current quarter being reported (3rd quarter) has consistently declined over the past year. In fact, it is lower today than it was only 30 days ago. The 2015 earnings estimate for the S&P 500 is now down close to 20% from where the estimates were a little over a year ago. Lastly, the two most popular measures to gauge the economy’s health are real GDP and jobs (non-farm payrolls). The growth rates of both indicators peaked some time ago. Many will make the argument that the recovery is still intact, because both GDP and jobs remain positive. Yes, they are still positive, but I would contend what’s most important is the direction of growth and the rate of change. There is no doubt about it – growth is slowing!

I consistently bring up “slowing down” because way too many people get caught up in the “now.” We’ve increasingly become a society of instant gratification and fail to take into account the future ramifications of any rash decision making. Equity markets are the ultimate place for instant gratification. Over the short term, it is emotions that drive the stock market. However, in the long run, fundamentals will ultimately dictate future returns. The U.S. markets are on an incredible run, but don’t get too carried away by the green on your screen. Take a moment to slow down and assess this gift for what it is. The S&P 500 has made its way back to the same level it was before its rapid decline began in late August. Only this time, the S&P 500 is actually valued more expensively when taking into consideration the decline in revenues and earnings. The Season of Giving has indeed started early for stock prices!