Words can be a very powerful tool to deliver a message, but sometimes a picture can be more effective driving home the point. Over the past year, I’ve routinely laid out the fundamental case on why one should evaluate and reduce the amount of risk taken on in a portfolio. These fundamental reasons span the gamut and include anything from slowing economic data points to a consistent deceleration in company earnings. The one thing I have not touched on, which is also part of our investment process at Tandem, is technical analysis.

In today’s environment, there are an increasing number of investors who rely solely on the historical trading patterns of assets to manage a portfolio. These investors could care less what a given company earns or where a company’s sales might be headed. Instead, they focus strictly on how historical price action can be interpreted to tell them where the asset price is headed next. At Tandem, we use technical analysis a little bit differently. First, we evaluate stocks quantitatively and then fundamentally. Once everything checks out with a potential investment, we use technical analysis to determine an entry point. On the flip side, if we own a stock that is quantitatively ranked a sell or the company no longer meets our fundamental criteria for owning it, we will use technical analysis to exit the position. At no time is technical analysis the reason for making a portfolio decision, but rather simply one step in the process to implement our strategy.

With all of that being said, I would like to walk through a few charts to show how we technically view the S&P 500 and a position we’ve been buying over the past few months. As a full disclosure, we do not hold ourselves out to be market technicians. We use the very basics (i.e. moving averages and support/resistance lines) to aid in our decision making. If you were hoping to learn about the Hanging Man, Inverted Hammer or Dragonfly Doji, you came to the wrong place.

Let’s start with a very simple two year price chart of the S&P 500.

When looking at this chart, the first thing that comes to mind is the fact we are essentially at the same place on the chart as we were two years ago. Fundamentally, this makes all of the sense in the world. Currently, the S&P 500 is estimated to have earned $100.88 in operating earnings over the past four quarters. As of this same time two years ago, the S&P 500 earned $107.30 in the previous four quarters. Based on earnings alone, the fact that the S&P 500 is not lower today is pretty amazing. We are currently paying more for less earnings. Now, that doesn’t make a whole lot of sense!

This brings me to the next chart. The following is a 5 year price chart of the S&P 500 showing support/resistance, a long term trend line and the 200 day moving average. 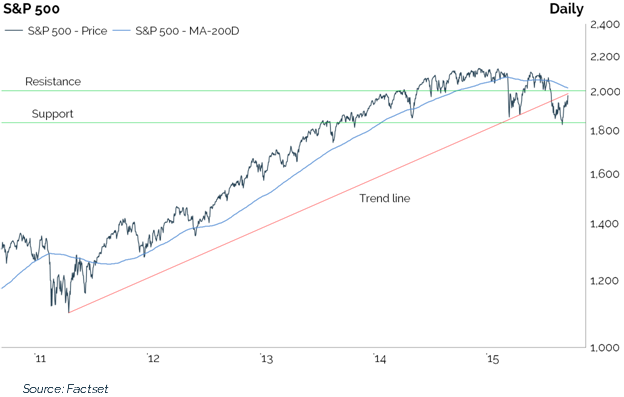 The last time the S&P 500 experienced a major correction and fell close to 20% was in the summer of 2011. If you do not remember this far back, let me refresh your memory. Europe was in the midst of a debt crisis and the United States had its credit rating downgraded by Standard & Poor’s from AAA to AA+. All of this drama coincided with the Federal Reserve ending QE2 in June 2011. After a low was made in October 2011, the market never looked back and proceeded to nearly double over the next three and a half years. Let the good times roll! In May 2015, the S&P 500 topped out around 2,130 and proceeded to chop around sideways for a few months until August, at which point we experienced our first 10% correction in three years. It is healthy to have corrections from time to time in bull markets. Typically, the correction is scary enough to shake out the weak hands, but not damaging enough to break long term trend lines. In this case, the August 2015 sell off and September test of the August lows held the long term upward sloping trend line perfectly, which began from the lows made in the fall of 2011. Everything looked great on the charts and the bull market seemed to have stayed intact until the market failed to post a higher high in November and could not successfully take out the all-time high made in May of last year. Instead, the S&P 500 made a lower high and began to trade in a narrow range on either side of the 200 day moving average until January of this year when the market snapped. The support of the trend line gave way and the S&P 500 seemed to be in a freefall for the first few weeks of this year. Since then, the market has managed to find support in the low to mid 1800s, which is right where it closed the year in 2013. On this chart, there appears to be very strong resistance around the 2,000 to 2,020 price point. The 200 day moving average, the underside of the upward sloping trend line and previous support all intersect around this level. My guess is we probably revisit 2,000 on the S&P 500 in pretty short order.

You are now probably wondering what happens after we potentially reach 2,000 in the S&P 500. Well, it’s either going to blow right through the resistance and challenge the all-time high set last year or it’s going to fail and push back toward the lower support level. Based on what we are seeing quantitatively and fundamentally across the economy and individual companies, the probability favors a failure at resistance and a re-test of the lows seen a few weeks ago. And, then what happens? Again, one of two things will happen at this point. Either the economic backdrop and company fundamentals will improve enough to justify bouncing off support around the lower to mid 1,800 level and potentially make another run at 2,000 level. Or, the S&P 500 fails and we head to much lower support as seen on the chart below. 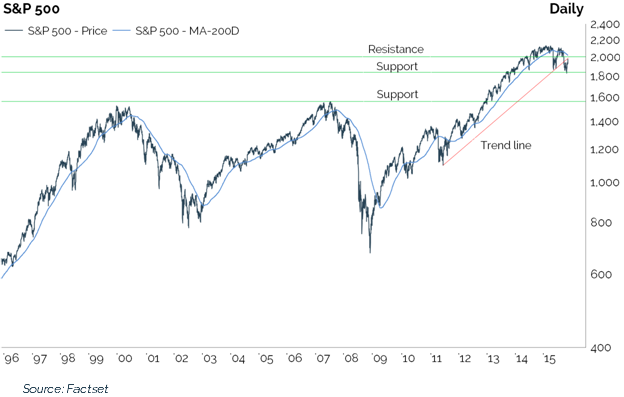 The chart above shows the last 20 years of the S&P 500. You can identify the tech bubble in 2000 and financial crisis in 2008. Both of these huge events saw the S&P 500 top out around 1,575. When looking at this long-term chart, the 1,575 level proved to be huge resistance in 2000 and 2007 before finally breaking through in 2013. The market essentially went nowhere for 13 years! The last time we saw the S&P 500 at 1,575, operating earnings for the prior four quarters was $98.35. For all intents and purposes, we are practically at that same level of earnings. Unfortunately, the stars are beginning to align and it’s probably only a question as to when and not if we go back and test the double top. And, for that I do not have the answer. It could be in the next week, month or year. I have absolutely no clue. But, what I do know is there will be plenty of investment opportunities that arise before the S&P 500 ultimately finds a bottom.

Case in point, over the past five months we have been building a position in Scripps Networks (SNI). It would be understandable for one to question our reasoning for buying a stock if we ultimately believe the stock market is headed lower. Well, as I’ve mentioned in the past, we own a portfolio of individual businesses and not the “stock market”. Over the very short term, some of our investments will ebb and flow with the general direction of the stock market; however, over the medium to longer term, most will trade based on their own merits. The stock market is best described as a market of stocks. Some stocks will bottom out well before the overall market reaches a low; while some may not find a bottom until well after the stock market has troughed and already begun its recovery; others may never really fall too far from their most recent high, while the stock market corrects. Every company is different and it’s these differences that make up the broad stock market. On a quantitative, fundamental and technical basis, we believe SNI has already bottomed out. Where we believe the S&P 500 may potentially go has no bearing on our outlook for SNI. Below is a three year chart of Scripps Networks. 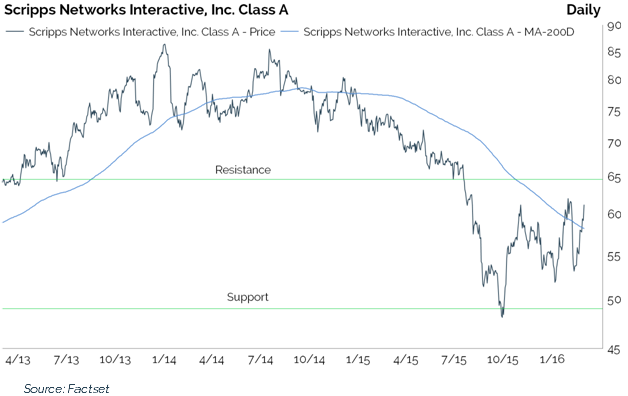 As you can see, SNI declined roughly 40% from July 2014 to October 2015. If you were to compare the price action of SNI versus the S&P 500, you would notice as the S&P 500 made lower lows on a closing basis in January and February of this year, SNI was making a series of higher lows. In the near term, if SNI can break above resistance around $65 and close above this level for a few days, the stock could very well revisit the old highs set back in 2014. Until this happens, we are more than happy to continue accumulating shares in the low to mid $50s.

Just because the S&P 500 looks to be completing a broadening top and likely to head lower doesn’t mean we go to 100% cash and call it a year. Far from it! There will be plenty of opportunities to put cash to work in the future. For us, Scripps Networks is just the beginning.