If you are just waking up from a month-long slumber, I’m here to report that May was void of excitement. In fact, the month of May was downright boring as far as the equity markets go. For the first half of the month, the S&P 500 traded in roughly a 15-point range – 2,385 to 2,400. As the market attempted a sustained break above the 2,400 level, we were swiftly blessed with some White House drama. On May 17th, President Trump was accused of obstructing justice and there was a belief that it was only a matter of time before the President would be impeached. The S&P 500 closed 43 points or 1.82% lower that day. In a period of absolutely no volatility, May 17th felt like the financial markets were coming apart at the seams. The panic lasted all of a few hours and within two days the market was right back in its narrow trading range threatening to break 2,400. This key resistance level finally succumbed on May 25th and we haven’t really looked back since.

The Nasdaq Composite was a little more exciting. It increased 2.5% in May, which now marks it up about 17% for the year versus the 8% advance made by the S&P 500. In fact, if you don’t own FAANG – Facebook, Apple, Amazon, Netflix and Alphabet (Google) – you are most certainly underperforming the Nasdaq and most likely underperforming the equity market as a whole. These five stocks have accounted for more than 40% of the S&P 500’s return this year.

The FOMO race for FAANG is officially underway. For the sake of returns in the short term, we will unfortunately be sitting out this race. However, I suspect at some point the willingness to stick to one’s discipline and not join in the chase will eventually be rewarded.

We did not take any new positions during May. However, we were able to take advantage of the sharp sell-off on May 17th to incrementally add to existing holdings. On that single day, we increased our positions in Factset (FDS)*, National Retail Properties (NNN)** and Dollar Tree (DLTR)***.

National Retail Properties has been a long-time holding in our clients’ portfolios. NNN is a REIT headquartered in Orlando, Florida. Their portfolio of 2,500+ properties over 48 states include convenience stores, restaurants, movie theaters, fitness centers, car washes and banks. The company is one of only four publicly traded REITs to have increased their annual dividend for 27 or more consecutive years.

We first purchased NNN for our clients’ portfolios in July 2001, when the company was named Commercial Net Lease. Over the past 16 years, NNN has remained a core position in our clients’ portfolios even though we have traded around it as we saw value in buying more shares or selling and realizing a profit. Most recently in September 2016, we sold a quarter of our position as the stock flirted with $50. At the time, our quant models flagged the stock as extremely overvalued and ripe for harvesting profits. A few months go by and the narrative of Amazon’s impending world domination spread like wildfire. Pretty much anything related to retail has been absolutely punished over the past several months. Some of the carnage is most certainly justified; however, we believe the shellacking NNN has endured is a bit overdone. We added to our NNN position when the shares were priced under $37 and trading at a historically wide yield spread relative to the 10 year U.S. Treasury. If retail continues to come under pressure, I suspect we will continue to build our position in NNN over the coming months.

Many of the same trends in April seemed to carry over into May. The S&P 500 has managed to continue its steady creep higher amidst record low volatility. A few macro indicators have given mixed signals on the economy, but for now equities have marched to their own beat.

• U.S. yield curve continues to flatten – the spread between the 10-year U.S. Treasury and 2-year U.S. Treasury is 87 basis points. This spread is down from 102 basis points at the end of April and 134 basis points in December right after the election.
• Chinese yield curve is inverted – in the U.S. an inverted yield curve has preceded each of the last seven recessions. China has the second largest economy in the world. Hopefully, they can buck the trend.
• Citi Economic Surprise Index continues to break down – measures how economic data is reported relative to expectations. In the chart below, the S&P 500 overlays the Citi Economic Surprise Index. Can you spot the divergence? 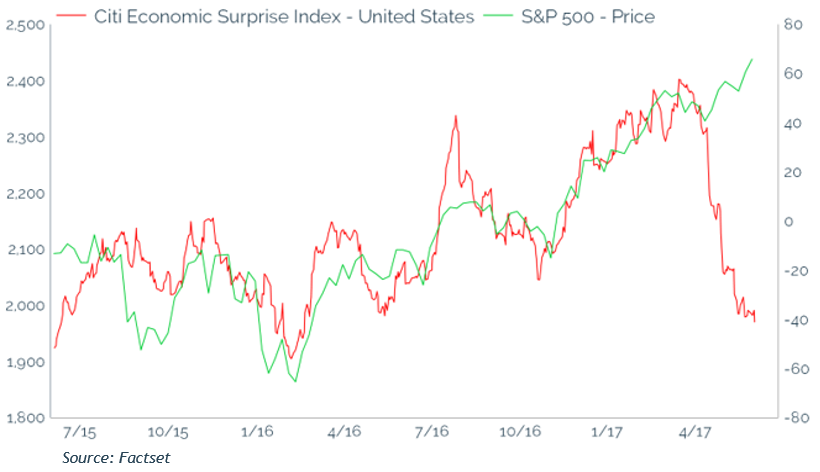 • Historically low volatility – according to Mike O’Rourke with Jones Trading, over the past year there have been 7 days where the S&P 500 was down over 1% and 15 days where it was over 1%. This compares to the historical average of 26 and 27 days, respectively. Volatility has been known to be mean reverting.
• Let the good times roll – the S&P 500 has been up the last 7 months. Over the past 10 years, the S&P has only made it once to 8 months in a row (April 2011). The index has been up 14 of the past 15 months. The last time this happened was November 2005 – January 2007.

• Former FBI Director James Comey testifies before the Senate Intelligence Committee (June 8th) – any indication of President Trump interfering with an FBI investigation could cause a stock market repeat of May 17th.
• FOMC meeting (June 14th) – the market is pricing in a 95% probability that the FOMC hikes the Fed Funds rate by 25 bps. It will be interesting to see how the Fed factors in the recent deceleration in jobs and inflation. If they do not hike rates as expected, does the market take it as negative, because growth may be slowing? Or, does the market take it as a positive, since the Fed will put a halt to their path of tightening monetary policy? For what it’s worth, the U.S. Treasury market is predicting a hike in rates. Interest rates on the short-end continue to rise, while interest rates on the back-end decline. The Fed is potentially behind the curve by hiking (represented by the U.S. 1-year Treasury yield) into already anemic growth (represented by the 10-year U.S. Treasury yield). 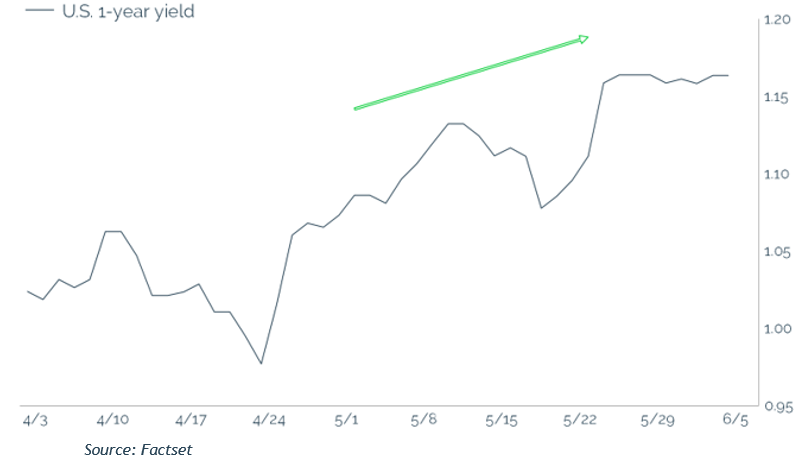 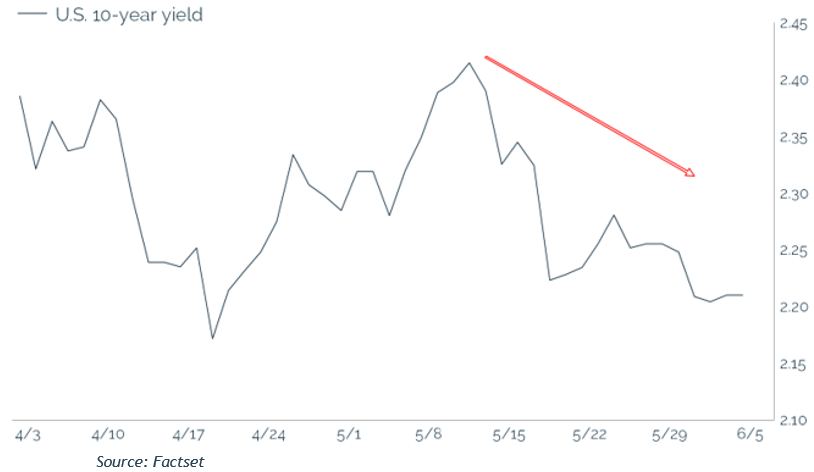