Go figure – one of the most volatile times in 2017 for the U.S. equity markets occurred in the last few minutes on the last day of the year to trade. Over the final 25 minutes, the S&P 500 dropped 12 points. More impressively, nearly half of that drop came within the last minute of trading. It was an interesting way to end a historically low volatile year. Some will likely speculate that the last few minutes of trading is a precursor of what’s to come. I think that type of speculation is jumping the gun a little bit. If anything, it’s a healthy reminder that financial markets can and will move quickly. In one minute of trading, the S&P 500 officially gave back the remainder of the gains seen after the gap open higher on December 18th after news broke that the tax bill would likely pass.

Even more impressive were the persistent gains among U.S. equity markets amidst the absence of volatility. In fact, 2017 was a historic year in many aspects. It was the first time ever that the S&P 500 on a total return basis was up all 12 months of the year. In addition, the S&P 500 Total Return Index has now moved higher for a record 14 consecutive months, and 21 out of the past 22 months. That is nearly two years of uninterrupted gains!

History was also being made on the volatility side. Since the VIX’s inception in 1986, the lowest average VIX in any calendar year, before this year, was 12.6. In 2017, the average VIX reading for all trading days was 11.1. Also, the highest VIX reading for any given day in 2017 was 17.28. This reading is the lowest yearly high since the VIX’s inception. Basically, these new VIX records simply confirm the slow methodical grind higher in the S&P 500 throughout the course of the year. 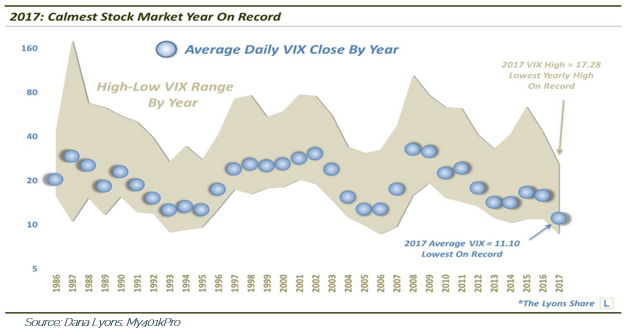 The question on everyone’s mind now is whether or not this market action can continue. If you believe in mean reversion, the answer is – probably not. It’s not to say we couldn’t have another 12 months just like the last 12 months. However, I would be extremely surprised if we did. The stock market doesn’t need to have a big down year to mean revert. Instead, we just need a little bit of volatility to come back. A 5% – 10% correction shouldn’t be met with fear, but rather wanted and accepted as a return to more normal trading. The biggest mistake you could make is to believe 2017 was the norm going forward.

A little over 10 years ago, we purchased a $9 billion market cap company named, Cognizant Technology Solutions (CTSH). That $9 billion market cap company is now just shy of $42 billion. CTSH provides information technology, consulting, and business process outsourcing services. In a nutshell, if you own a business and want to become more efficient, cost-effective and adapt to the ever-changing world of technology to enhance your operations, you hire CTSH.

CTSH has been a staple in our Equity and Mid Cap Core strategies. The table below highlights some of their fundamental business growth over the past 10 years.

Not only has the fundamental growth of the business been spectacular, but this has also translated into strong shareholder returns. We purchased the stock over the course of 2007 and 2008 with an average (split-adjusted) cost of $15.35. With the stock closing out 2017 at a price of $71.02, that indicates a cumulative 362.67% return, which also equates to a 16.55% annualized return. In addition to the stock price return, CTSH has bought back over $4 billion worth of their shares using cash flow and not by levering up the balance sheet. Just recently, CTSH announced an additional $300 million accelerated share repurchase plan.

However, the most exciting news came this year when CTSH announced for the first time they would be paying out a quarterly dividend. Our familiarity with the company and analysis has given us great confidence in CTSH’s ability to consistently grow their dividend going forward. In fact, CTSH will generate enough cash this year and still have some left over after meeting capital expenditures, repurchasing $1.5 billion worth of their shares and doubling their current dividend, if they so choose. It is for this reason, along with the company being attractively valued by our quantitative model, that we have started to accumulate a position in our Large Cap Core strategy.

Two months ago, I wrote a short paragraph on Bitcoin explaining the ridiculousness of financial pundits trying to “value” cryptocurrencies. The hundreds of cryptocurrencies being traded are not investments; they are speculative bets. The investment would be the technology behind the cryptocurrencies – the blockchain. This technology has the potential to revolutionize the financial system. But, just as the internet changed the way we communicate with one another and revolutionized everything we do in today’s world, thousands of companies did not survive the initial excitement during the Tech Bubble of the late ‘90s. I suspect the current crypto mania is likely to play out in a very similar fashion.

The most troubling aspect of this craze is the extent to which people are willing to go to participate in the action. Recently, Joseph Berg, president of the North American Securities Administrators Association and director of the Alabama Securities Commission told CNBC the following: 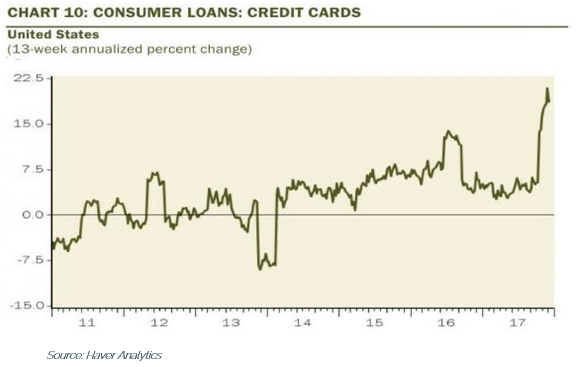 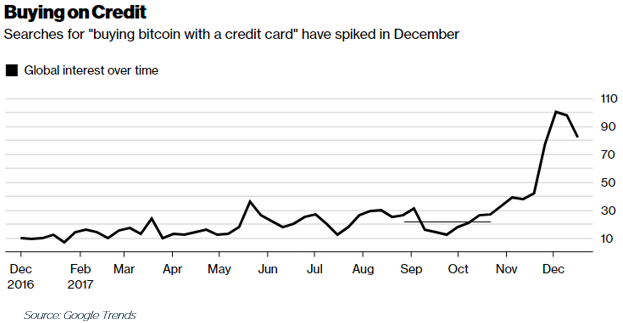 If people are willing to lever up their personal balance sheet and put their home at risk, a collapse in crypto prices has the potential to derail the greater economy. Sometimes trying to make a quick buck like your neighbor is just not worth it. There are other ways to invest in blockchain technology without “betting the farm” on an unregulated “currency”.