The past two months have been nothing short of an emotional roller coaster. The S&P 500 was quietly bouncing around the upper end of its two-year trading range when Brexit came along. The British vote to leave the EU surprised most investors, which caused roughly a 5% drop in the S&P 500 in the two days after the vote. And by the sixth day following the vote, the S&P 500 managed to climb all the way back to where it started. The speed and magnitude of the fall and subsequent recovery left a lot of people dazed and confused.

One minute, failure of the S&P 500 to break out of the upper end of its trading range coupled with a significant spike in volatility, lead many pundits to declare an end to the seven-year bull market. No sooner than the ink had dried on their commentary did the market’s reversal leave everyone speechless. Brexit was supposed to leave the world economy in despair and surely headed for a global recession. Fortunately, those predictions did not come true and we were left to live another day.

At Tandem we had a different view on the affects Brexit may have on the world economy. Those of you who know us well know that macro analysis is not really a part of our investment process. We focus on the micro. Our portfolios are managed on the basis of an individual company’s valuation, underlying fundamentals and the sustainability of those fundamentals. With that being said, we are often asked about our views of the world and so we feel compelled to comment even though it has very little bearing on how we manage portfolios. In my column last month, I stated the following regarding Brexit:

“This is not 2008; it is 2016 and the world is not melting down. Honestly, no one knows how the United Kingdom’s departure from the EU will play out in financial markets… The severe and swift negative reaction in financial markets around the world was not a result of the actual vote to leave the EU. Rather, the negative reaction exhibits what the vote represents. The vote to leave was more indicative of a country’s desire to distance itself from globalization and regain its sense of nationality… This could certainly cause a disruption within the British economy, but I fail to see how it causes the global economy to spiral out of control as some people have suggested… The secondary and tertiary effects of the U.K.’s decision are what need to be monitored closely in the months to come.”

It was my belief then and continues to be today that events surrounding Brexit would introduce increased volatility to financial markets, but not an immediate global recession. Rather, it would take months, and maybe years, for us to really understand the effects Brexit would have on the world economy. What I did not see coming were record highs being set in the S&P 500 within a mere nine trading days of this historic event. I thought for sure we’d continue to be stuck in the 1810 to 2130 trading range. So, what did cause us to finally break out to the upside?

Not a whole lot changed with the fundamental picture over this past month. For the most part, the macro data was better than expected. The “beat” in expectations was due mostly to the bar being lowered after the Brexit vote. The absolute data and year over year change was certainly nothing to get excited over and was mixed at best. But, this has been the same story for several years now and is nothing new. It doesn’t seem to me as if the macro data gave any clear indication that growth would imminently increase at a faster rate, thus justifying a break out to all time highs in the S&P 500.

Since the start of the quarter, one positive has been the improvement in the second quarter earnings being reported. On June 30th, according to Factset, the second quarter earnings for the S&P 500 were estimated to come in at $28.47, which represented a 4.4% decline in year over year growth. As of August 2nd, the earnings are estimated to be $29.08, which would be a 2.4% decline from a year ago. Don’t get me wrong, the S&P 500 is still most likely going to post its 5th consecutive quarter of negative earnings growth, which isn’t a good thing. However, at the very least, corporate earnings are trending in the right direction this quarter. The following graph and table show the trend in 2016 second quarter earnings since estimates were being given around the start of 2015. Can you spot the little uptick around the July 2016 mark? It’s not very big, but it could be the start of a change in the trend. 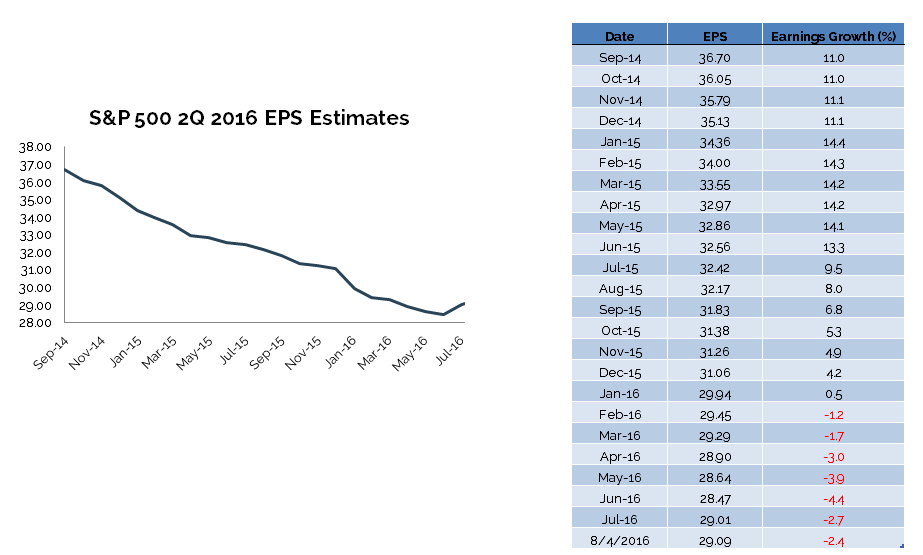 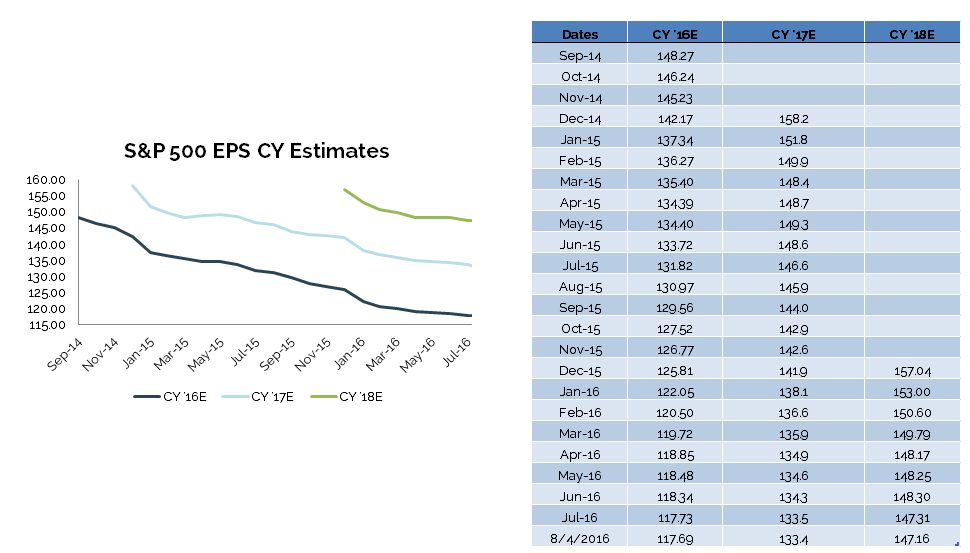 So if the macro environment really hasn’t changed all that much and the corporate earnings outlook for the remainder of the year continues to deteriorate, what could possibly justify the current break out to all time highs in the S&P 500? FOMO! A little over a year ago, I wrote a column on the Fear of Missing Out (FOMO). I described it as the following:

“The Fear of Missing Out (FOMO) is a terrible, debilitating, mind-altering feeling that makes even the strongest succumb to bad decision making.”

It sure feels as if we are living in a FOMO type of world right now. The recovery in financial markets happened so quickly in late June/early July that most active traders were caught so completely offside that they had no choice but to chase the market they were given. The stock market was going higher and they couldn’t fight the tape by staying on the sidelines or worst case scenario – holding short positions. There was no true macro or micro reason to break out of the current two year trading range. It was strictly technical in nature with traders having to “chase a chart” due to FOMO. I can’t imagine telling a client that we bought a stock for the sole reason being that the chart looked good. I’m sure that would go over really well. So, you can probably guess the insanity that ensued here at Tandem. I’m not going to lie – it was pretty crazy. We took an initial position in Nike (NKE) on June 27th. That was it. For all of the hoopla surrounding Brexit and new highs being made shortly after, the month of July was easily one of the least active months of trading in the history of Tandem. We made zero trades at the composite level for the entire month. I’m pretty sure that makes us the antithesis of FOMO.

To our clients, I can promise that we will not let our emotions dictate how we invest your money. For many of you, that is why you hired us in the first place. Our investment philosophy and process guide our decision making – not some chart. Don’t get me wrong, technical analysis is part of our process. But it plays a very small role. We will only take action (buy or sell) if the stars align with our quantitative, fundamental, valuation and technical analysis. Every morning our investing emotions are checked at the door, as this is the only way we can deliver on what we promise. And, by the way, that door has recently changed since we moved up two floors to Suite 400 within the same building at 145 King Street. If you’re in town, we would love for you to come by and check out our new office in Charleston, SC.