For most of us, we live in a world of absolutes and binary decision making – yes or no, up or down, on or off. In the investing world and more so investment analysis, we tend to look at things in a more abstract manner.  By no means is it complicated, but rather just a little bit different.  At Tandem, we live in a relative world.  Everything we do – from the analysis of our quantitative model, to our stated objective of delivering superior performance with less volatility over a full market cycle – is all relative in a sense.

There are two concepts that our quantitative model and investment process are built upon – rate of change and reversion to the mean. I believe rate of change is the hardest concept to grasp because most of the time we see and hear data presented to us in absolute terms.  For example, when the financial media reports the monthly jobs number, you often hear that jobs increased by some number in the tens or hundreds of thousands.  Hearing a number like this gives you a sense of security and confidence in the economy, at least in the short term.  However, in the medium to long term, it is much more effective to analyze changes in the data on the margin rather than the absolute headline number.  Inflection points are often precursors to changes in asset prices that typically cannot be seen when simply analyzing absolute data. 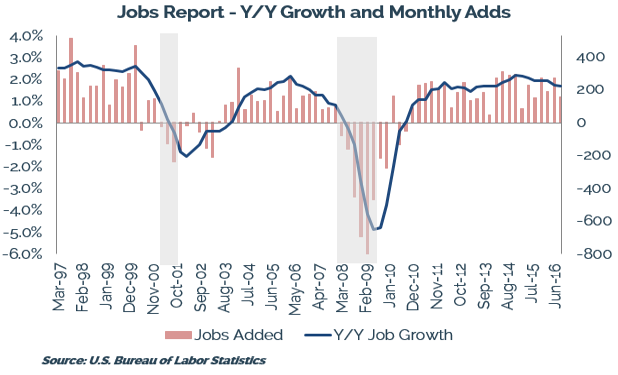 As you can see from the graph above, the year over year growth rate of jobs peaked in February 2015. The total number of jobs created have continued to remain positive every month, but what you don’t hear is the pace of job growth has declined for 19 months now.  In every business cycle, job growth troughs and begins to accelerate coming out of a recession.  Eventually, the growth rate plateaus as the business cycle matures and ultimately begins to decelerate late in the cycle.  The deceleration of growth among most economic data points begins to take place well before the official start of a recession in the future.  The inflection point at which deceleration begins to take hold is a great pre-cursor to economic weakness and an increased likelihood of a recession.  As growth begins to wane and before the data turns negative, you may want to consider reducing the risk in your portfolio.  If you are waiting for a specific economic data point such as the monthly jobs report to print a negative number on an absolute basis, there is a good chance the economy is already in a recession and you’ve missed your opportunity to re-position your portfolio.

At Tandem, we use the rate of change example a little bit differently. The example I gave above is based on a single macro data point.  Since we evaluate stocks from the “bottom up”, we use the rate of change based upon several company specific data points and evaluate that change relative to a valuation metric.  There are no two companies perfectly alike, so what makes one company a buy might make another company a sell.  However, the one similarity among our entire universe of stocks we follow is that changes in a stock’s ranking typically occur at inflection points.  And, it is at these inflection points that most of our actions, whether it be a buy or sell, take place.

The second concept our quantitative model revolves around is reversion to the mean. Everything in life ends up reverting back to the mean, or average.  Typically, the further something stretches in one direction, the more severe the reversion snap back tends to be.  Eventually, we get back to “normal”, where we spend most of our time.

Let’s look at this year’s World Series being played between the Chicago Cubs and the Cleveland Indians. The Cubs (107 seasons) and the Indians (67 seasons) hold the longest and second longest current World Series championship droughts.  Luckily, for one of these teams this drought will end within a few days!  More recently, the third longest drought in MLB history, which was held by the Boston Red Sox for 85 years, was broken in 2004.  Over the next nine years, the Red Sox went on to win two more World Series championships.  In 2005, the second longest streak held in MLB history by the Chicago White Sox for 87 years was broken.  All of this goes to show that streaks are meant to be broken.  Winning and losing streaks will not go on into perpetuity.  Eventually, they will end and in many cases a lengthy losing streak will be followed by several years of winning, as the Red Sox recently proved.

For the better part of the past two years we have been net sellers, which simply means we’ve had more opportunities to sell than to buy. One of these days that will change, but for right now what we’ve been seeing on the company-specific level continues to line up with what we see on a greater macro basis.  For the most part, stocks are expensive.  They are expensive relative to their absolute level of earnings and the rate of growth of their earnings.  Broadly speaking, the appreciation in stock prices has far exceeded the growth of the general economy. 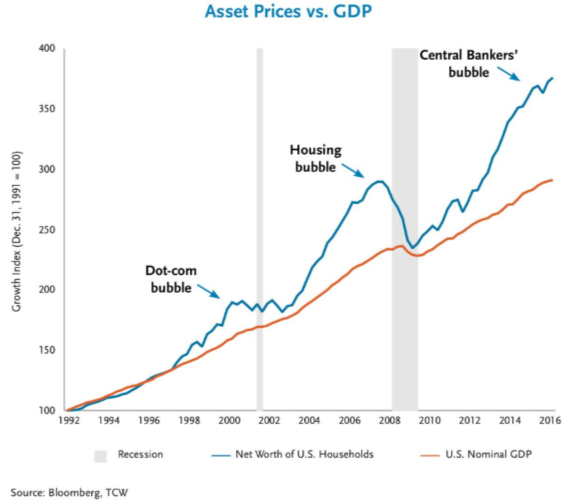 The chart above shows asset prices (U.S. household net worth) vs. U.S. nominal GDP. You can clearly see what happened to asset prices when they significantly deviated from GDP over the past 20+ years.  In each instance, asset prices and GDP eventually converged.  During the “Dot-Com Bubble” stock prices fell considerably, but real estate did not fall nearly as much.  Therefore, asset prices as measured by a household’s net worth consolidated for several years until GDP caught up to asset prices.  This is one way to revert to the mean – let the mean catch up.  During the “Housing bubble”, both stock prices and real estate values came crashing down.  This put massive pressure on asset prices across the board, so over the course of two years asset prices came falling down to the level of GDP.  Currently, many speculate we are in a “Central Bankers’ bubble”.  Based on the historic level of intervention among global central banks over the past eight years, we may very well be living in a bubble.  But, how does it end?  There are three ways for asset prices and GDP to realign.  The first way is that all asset prices will stay stagnant for years to come until GDP finally grows to match the current asset level.  The second way is that assets will continue to grow, but at a slower rate than GDP, which would allow GDP to catch up to assets but over the course of a much longer period.  Lastly, asset prices must fall to meet the current level of GDP.

I have no clue which path we ultimately take. However, I do know that none of them are that appealing.  The best-case scenario is GDP growth accelerates from here and asset prices continue to grow, but at a subdued rate relative to GDP.  The only problem is there hasn’t been any reason to believe GDP growth is set to accelerate from this level.  We have been muddling along for years with the rate of change in several economic indicators having already begun to decelerate.  For the life of me, I have no idea what changes our growth trajectory at this stage in the business cycle, which leads me to believe that the greatest risk we currently face is a sharp revaluation in asset prices to the downside.  Believe me, I hope I’m wrong.  But either way, if growth starts to accelerate our models will pick up on the inflection point and give us a clear signal to begin deploying our clients’ cash.  If stocks fall to catch up to GDP, our clients’ cash position will allow us to take advantage of cheaper prices and act as a buffer to falling stock prices.  Regardless of which scenario plays out, our current positioning affords us the ability to take immediate action.