As I reflect on the events that transpired in 2015, I keep coming back to the Groundhog Day reference I made in my August column. Each month it got harder and harder to write this monthly column, because I felt as I was repeating myself over and over again. And, I apologize if I sounded like a broken record at times. However, I honestly felt as if I was watching a slow moving train wreck through most of last year. There were and continue to be only so many ways I can express the disconnect between the price of the S&P 500 and the fundamentals of the underlying companies and the economy as a whole.

I promised myself that I would not bore you with another diatribe on the weakening U.S. economy. So, if you want to refresh yourself with our most current thinking on the U.S. economy, please visit our website and read the commentary from December 17th. Instead, I’m going to rock your world with a review of the financial markets and what may be in store for 2016.

As regular readers of this column may recall, I wrote A Year in Review around this same time last year. I went back to read it and quickly realized I could probably get away with using the exact same column for this month. Not much really changed from 2014 to 2015. The same market indicators flashing a big warning sign in 2014 continued to do so this past year. 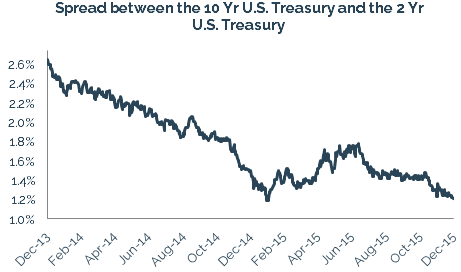 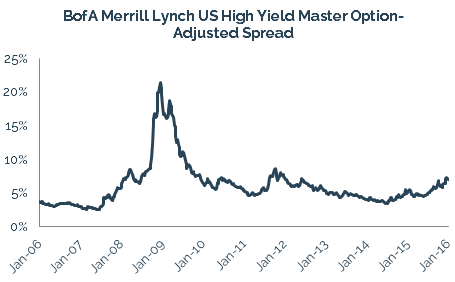 The end result in 2015 wasn’t nearly as exciting as the 13.69% total return for the S&P 500 in 2014. This year the S&P 500 managed to squeak out a 1.38% total return (includes dividends) and a -0.73% price return. Basically, the index was essentially flat with the dividend being the sole contributor to a positive total return. But, don’t be fooled by the headline return number. The majority of stocks were anything but flat last year. In my August column, I touched on the topic of market breadth. Ideally, you want broad participation in a market rally with a greater number of stocks leading the advance than detracting from it. 2015 ended up being the year of FANG (Facebook, Amazon, Netflix and Google). The following are the price advances of each stock:

All of the other stocks that make up the S&P 500 declined an average of 5.9%. Essentially, what you saw last year was a handful of the largest companies keeping the market as a whole afloat. The deterioration underneath the broad market was more or less masked by FANG. Another way to view the deterioration in market breadth and lack of participation in advancing stocks is to chart the relative performance between the S&P 500 Equal Weight Index and the S&P 500. 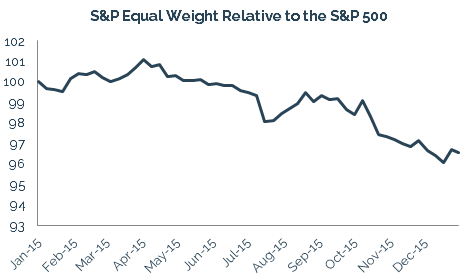 So, what’s next? Well, as I write this column the first week of trading in 2016 is in the books and it was a record setter. Unfortunately, not in a good way. The S&P 500 closed lower by 6%, which makes it the worst start to a year in the history of the stock market. Now, that’s a long time! The only other time the stock market closed lower by more than 5% in the first five days of trading was 2008. We all know how that year turned out. I’m not predicting another 2008 where the market declined by over 38%, but I don’t think it would be making a bold call by saying we will not experience another flat return as we did last year. It’s a lot easier to say the market is going to be down significantly in 2016. After all, we are already down 6% in the U.S.. China’s market is an absolute disaster and its currency is on the verge of becoming unstable. To top it all off, North Korea is testing the world’s patience by setting off nuclear bombs. The world is a scary place and rightfully so, but that doesn’t mean money can’t be made.

For those of you who are either clients or regularly follow us, you will recall my frustration for not being able to find much to buy over the past year. We’ve been net sellers for over 15 months now, which has left our flagship strategy, Large Cap Core, holding the most cash as a percentage of the total composite value in the history of Tandem. Our Large Cap Core Composite is sitting on more than 29% cash as of December 31st. This was never our intention as we do not make market calls or allocate to a specific cash level. We’ve just had more stocks to sell than to buy. It’s as simple as that! One day I promise we’ll have more stocks to buy than to sell and our cash levels will decrease. And, who knows, that day looks to be getting closer and closer with every down draft in the stock market.

Our proprietary quantitative model, which warned us of the disconnect between company fundamentals and valuation over a year ago, is still showing most stocks as expensive relative to their growth rates. This is why our cash levels increased in the 4th quarter of last year. Based on the continued deterioration in the U.S. economy, company fundamentals and fear of an overall global slowdown, I suspect we still have a ways to fall before opportunities really present themselves. Cash is a nice asset to be holding during times like these. Not only does it provide a nice buffer to a portfolio’s return in a declining market, but it allows you to buy when everyone else is selling. And, this is when you can really create wealth. In the meantime, capital preservation is of the utmost importance. There is no reason to be a hero. Be patient, stay disciplined and wait to turn everyone else’s panic into your asset.