Buy when there is “blood in the streets”.

Buy on the cannons and sell on the trumpets.

If you want to judge where we are within the current market cycle, look no further than fund flows from retail investors and corporations.  Historically, the retail investor has shown up late to the party.  Take a look at the chart below depicting fund flows from different types of clients at Bank of America Merrill Lynch (BAML). 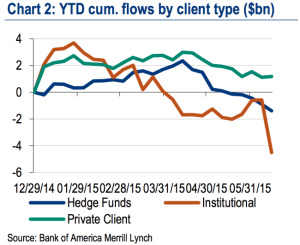 “Net sales of U.S. stocks amounted to $4.1 billion last week (ending June 19th), the largest total since January 2008.  After three weeks of net buying, institutional clients’ net sales were the largest in our data history.  Hedge funds were net sellers for the ninth consecutive week, while private clients bought stocks last week following the previous week’s net sales.  Buybacks by corporate clients were slightly lower than in the previous week, but on a four-week average basis have generally continued at a constant pace since mid-May.”

So, if institutional investors and hedge funds have been net sellers year to date, with the largest outflows among institutional investors on record occurring two weeks ago, who has managed to do enough buying to keep the S&P 500 around all-time highs?  Retail investors have bought some of these shares, but certainly they don’t have the fire power to absorb all of the selling pressure.  As a regular reader of this column, you most certainly would’ve guessed… corporations!  You will notice in the table below, on an annualized basis, global corporate buybacks are at the same level today as they were by the end of 2007. 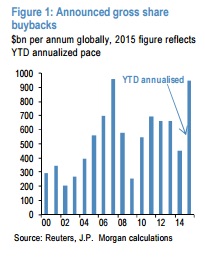 If you recall, 2007 was not exactly the best time to be going “all-in” on U.S. equities and surely not the best time to be using shareholders’ cash to be doing so.  On an intraday basis, the S&P 500 peaked on October 11th, 2007 and bottomed on March 6, 2009.  Coincidently, corporate buybacks hit a record high as the stock market peaked and buybacks hit a low in 2009, which was a level last seen in 2002 during the previous trough in the market.  To say corporations are not the best market timers would be an understatement.  In fact, if you just did the opposite of corporations when it comes to buying back their stock, you would have done pretty well for yourself.

I’m not saying we are headed for a year like we had in 2008.  What I am saying is that caution is probably warranted.  The last time corporations bought back a record amount of their stock and institutional investors sold as much as they did during the week of June 15th, 2015, nine months later the markets became unglued.  Again, I’m not calling for a 57% drawdown in the S&P 500, like we saw from 2007 to 2009.  But, now is not the time to be going “all-in”.  That time has passed for now.  The prudent thing would be to assess the risk of your portfolio and make sure you are comfortable with what you own.  It’s not time to be complacent or fear what you may miss.  Each investor has their own tolerance for risk and it would be wise to make sure your portfolio is structured to allow you to sleep at night.  Buy low and sell high.  It’s a lot easier said than done.  But, if you don’t start now, you never will.